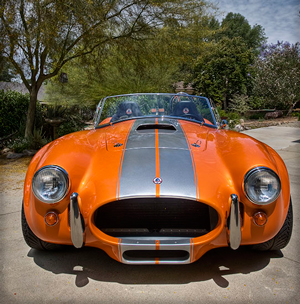 Well, it was always difficult to think about selling Ozzy.  When you have built a car that you dreamed of from the first day you saw it in 1965, selling it is hard to do.  So, when I put Ozzy up for sale while we were on the east coast it was turbulent and I was not about to accept any short offers.

I have never felt like an east coast guy.  When we moved from San Diego to Annapolis, it was difficult for me.  When we built Ozzy a few years ago, we always knew we were headed back west.  We just did not think it would take as long as it has.  With the house in Annapolis nearing two years on the market, we thought about shedding stuff and resettling on the road.  Almost like we planned it, that orange Cobra was just too much for those east coast boys to handle.  After all, Cobra’s are supposed to be blue, right!

I was secretly happy that there was little interest in Ozzy.  Still, I felt bad that I was on the road and he was in the garage.  These cars are supposed to be driven.

At one point, we had an inquiry.  Not to buy Ozzy, but for him to be in a movie. 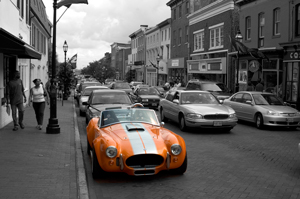 It gave me the idea that maybe we could get Ozzy back west.  We even were talking to Leno about a spot in his garage in Burbank and a couple of museum berths…even a car dealer showroom.  None just seemed right.  We even thought about leaving him back in Scottsdale, but that driving season is as limited as Annapolis.

We used to say that having Ozzy on the east coast was like living in a black & white world.  Our friend Gordon Levy, who painted Ozzy, claimed that NASA could track him for space.  When we used to take him out in the provincial town of Annapolis, we would drive downtown and it seemed like all the color just drained out of the town.  Can you image?

While we were in Santa Barbara our friends Tina and Dennis made the trek up from LA.  We had a great time together at El Capitan.  The video and excerpts are here on the blog.  We talked about how Ozzy has always been a west coast car.  Born in Scottsdale, we have always had the most fun with Ozzy in the Southwest.  The cool dry weather has always been to his liking.  We talked with Tina and Dennis and they felt they would make good foster parents.  We already knew that!  So we agreed to give Ozzy a new home and new foster parents close to where we could visit and where he would be loved and appreciated by two great people. 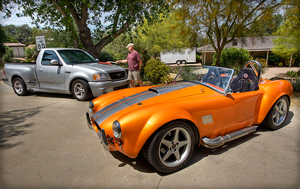 So, when we were back in DC at the factory, we packed Ozzy up and put him in the trailer, Harriot, for his trip to California.  Four days of wondering how he was doing, he finally arrived at Tina and Dennis’s just north of LA.  So, now the orange boy can be seen cruising Pacific Coast Highway (PCH) in style.

Tina is a pro photographer and shot these images of Ozzy in his new home.

Can someone really be attached to a car like this?  You bet!  Can’t wait to visit! 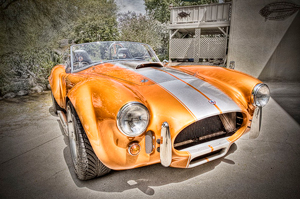