Switzerland? France? Austria? No the US Northwest! This place is amazing. About 40 miles due east of Spokane Washington, Coeur d’ Alene Idaho is a picturesque, clean, friendly and old world city in the pan handle of Idaho. Not too far from Canada, there is a feel of the Canadian hospitality with a personality all its own.

We arrived at the campground at the mouth of the Spokane River and the lake. It was late when we got in, so we woke early on Saturday morning and headed for downtown. The street were empty and clean as if we were at Disney World before the park opened. We found a local coffee shop and were amazed at the quality of food and we had a chance to meet some locals. They gave us ideas of what to see and where to eat, shop and experience. Little did we know it at the time, but the entire day was filled with firsts and interesting happenings. 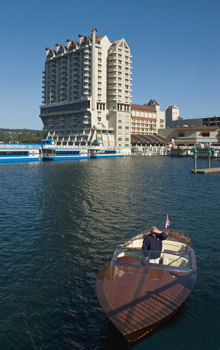 After breakfast we headed toward the lake on some back street and happened onto the launch of a brand new wooden handcrafted speed boat designed and developed by the Coeur d’ Alene Custom Wooden Boat company. The new owner is a retired off-shore ocean racer named Gerry. He has the distinction of going over 220 mph in a powerboat. His new boat was beautiful and the picture does not do it justice. He took it out for its first spin at over 65 mph. The boat designer and builder grew up in the Baltimore area not too far from our factory. 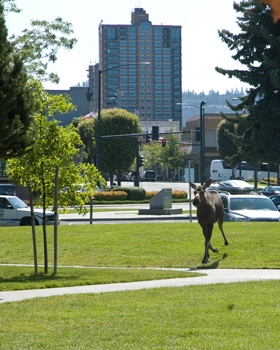 From there we decided to head to the beautiful Independence Park along the lake edge. It is where the opening panorama was taken. Our second surprise occurred when we were leaving the park to head back downtown. On the path in front of us was a yearling female moose.

Lost and frantic. She was face to face with us and very scared. We called 911 and the police and rangers showed up to get her back to her home. During the experience we were able to meet some people from Houston, some locals and a class of kids from Montana.

We figured we had enough, so we went to lunch at a local brewpub called Moon Time. Great food and even better draft beer. From there we went to a local natural market that turns out should be a Keys reseller. They just don’t know it yet, but our Oregon salesperson Angie will have them on board soon. We picked up some fresh local salmon for dinner. On the way back we stopped at Best Buy to see if there were any new Wii disks we needed to own and ran into a guy who recognized Bob’s surf “hoody” from a Malibu long board surf shop called Woodies. After that, back to the campground on the water.

Here is a picture of the boats at the resort. Everything is clean and in its place.

Our new friends from Houston shot this picture of the two of us. Like many towns, they have mascots and this town is no different. Of course, it is the moose here! 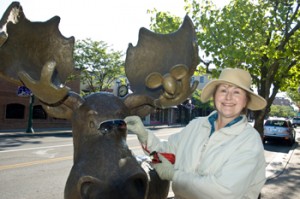 Another picture of the moose and mouse that is the image of Coeur d’ Alene Idaho with Wendy.

A must see location. Plan to spend a week if you only want to see 10% of what this place has to offer.