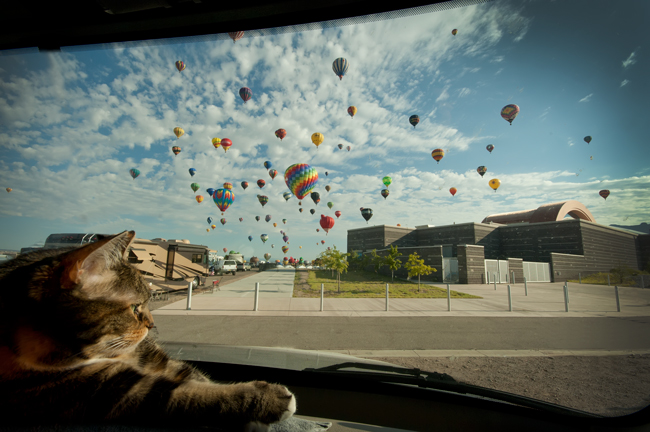 October is quickly becoming a month of exploration for us.  Early in each October is the International Balloon Fiesta in Albuquerque, New Mexico.  This was our second year and we park on the balloon fiesta field near the museum.  Early mornings before dawn we trek to the field to watch 12-15 balloons go up before dawn.  After that, the field fills with over 500 hot air balloons of all shapes and sizes.  Then in waves, they launch skyward.

The famous “box winds” were perfect this year.  As the waves of balloons launched, they headed south and climb in altitude until the wind direction changes to north.  The sail over the field again and again until it is time to land.

Once again, Bob’s pictures were picked up by the NBC affiliate in Albuquerque for their unique perspective.  Above is a picture from the passenger seat of the Grizzly with Isabel kitty.  This is literally what she saw each morning,

The pair of balloons pictured were a five exposure handheld sequence using Bob’s HDR technique to grab an overhead shot.  Then he added some brush strokes and a bit of software bias to create an illustrated looking poster.

Finally is a picture of the Balloon Museum populated with balloons from every direction.  This will be Bob’s entry in this year’s photo contest being sponsored by Nikon and the Balloon Fiesta.

As much as a annual event the balloon fiesta is becoming, so is our trek to the new Spaceport in New Mexico just north of Las Cruces.  Last year we met a new friend.  His name is Dr. Jerry Brown.  The fact is that he is a real rocket scientist formely with NASA.  Last year we visited the Spaceport on a private tour with Jerry.

There will be more pictures and video after we have a chance to stay put for a while.