Cruising Back to the Future

Growing up, I was a total car guy.  Still am! Wendy knew that when she met me.  It was part of the deal. Most women ‘tolerate’ the other woman when she has four tires or a tiller.  It is super nice to discover that your girlfriend is a bigger car guy then you.

Imagine its time to trade in our five year old Jeep Grand Cherokee and she says, “lets get a Vette.”   Seriously …and then she says, “how about a Grand Sport!”  No, no it was not a dream.  The pinch actually hurt.  Whoa, can you imagine!  Guys, the perfect woman!  So we started to look and found the one we wanted.  A White 2017 C7 Grand Sport Corvette with everything on it and more.  A “True” Super Car.

What a blast it is to drive a true cruiser that can morph into a LeMans contender.  We can drive to the Keys or just out for a lunch cruise with friends…or just blow the doors of a Ferrari 458.  It is fast, but friendly.  A far cry from the 1967 L88 beast or taking out Ozzy, the Cobra.  It is the best of both worlds.

This car of ours is very fast.  The first time out, we punched it and it went sideways.  The state-of-the-art paddle shifter passes through 8 gears with a slam and a bang.  First time on the freeway we got into it and 100mph in 3rd gear.  Believe this or not, we cruised to see friends in Tampa and got 30 miles to the gallon because it can turn off 4 cylinders in ECO mode.  A knob selector changes the power, shifting, steering and suspension from ECO to Touring to Sport to Race with a flick.

Did I say it was fast.  So fast that there are few tracks that let it achieve the 200mph top speed.  The below video was shot from a C7 ZO6 equipped with a Corvette Data Recorder that monitors the car and maps the track so that you can develop a racing lap times report with video. We have ones of these onboard to monitor our whims. Unlike many car manufacturers, Corvette believes you will race this car.

The video shows a Camaro ZL1 chasing the Grand Sport and followed by the ZO6.  Spoiler Alert! The key word is chasing and never catching.  The track is Sebring which is just south of us.  It is about 120 miles southwest of our place in Titusville.  Famous place seemingly designed for the Vette.  Smooth triumphs over horse power…lots of experience racing also adds. 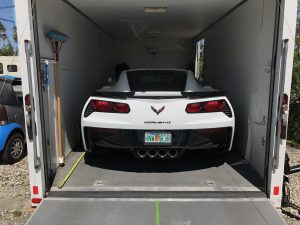 Believe it or not, this is our daily driving grocery getter.  The plan is to trailer the car around the country with us during our transcon travels.  We towed the Jeep 4-wheels down and it did us well.  Now the plan is to travel to places that we want to see in style and very quickly.  The good news is that White Hot fits in Ozzy’s trailer.  White Hot fits in albeit a bit tight.  There are so many really cool places that we want to visit.  Included are a few race tracks.

White Hot is a Grand Sport coupe with a removable carbon fibre T-Top that fits snuggly into the back hatch area.  Nice days and we go topless cruising and boozing along.  There are a bunch of Corvette’s where we are when in Florida.  So there is no shortage of cruising places and cruising buddies.

Grand Sport’s pay homage to the 12 1963 race cars that Corvette built to compete in road racing series racing in the 1960’s.  Here is some history for you car guys.

A familiar face was behind the Grand Sport, one Zora Arkus-Duntov. The Corvette’s first ever lead engineer, along with racer Briggs Cunningham, entered three nearly stock Corvettes in the 24 Hours of Le Mans. The Corvettes had been upgraded with 283 “Fuelie” engines, mechanically supplying fuel injection. The Corvette upset the Europeans in the large GT class, placing first and eighth overall. The Corvette shared the podium with Ferrari, Aston Martin and Porsche.

Coming off the success in Europe and similar victories in the U.S., Duntov commissioned and oversaw the development of the original Corvette Grand Sport. Duntov had his eyes on the 1963 24 Hours of Le Mans to reveal the project, and was hopeful for success. The plan was to build at least 125 ultra-light, high-powered cars to satisfy homologation rules for the GT production class. However, only five Grand Sports were completed before General Motors issued its edict to eliminate factory racing programs. The program died before Le Mans.

Duntov would not let the engineering and development go to waste on the Grand Sport. He managed to get the few Grand Sport prototypes to private racers. The real-world evaluation validated how successful the Grand Sport could have been.

Despite the Grand Sport name dying in 1963, Duntov paved the way still with development of the “big tank” and “big brake” options for the C2 Corvette. He also oversaw the development of the L88 big block V8. Each of these programs were designed to give racers a competitive edge straight from the factory. Flash forward nearly 20 years, and the Corvette team pulled a fast one on competition with the Z51 performance handling package. When equipped on the C4 Corvette, it propelled the vehicle to new heights on the track, becoming the preferred option for Corvette buyers. In fact, the package dominated SCCA competitions, leading to the organization’s banning of it in 1988, and the creation of the Corvette Challenge series.

1996 was the year, ladies and gents. Finally, long after Duntov had developed the idea of such a Corvette, the Corvette Grand Sport special edition debuted. The Grand Sport graced the final production year of the C4 Corvette, and arrived with an Admiral Blue exterior featuring an Arctic White stripe and red hash marks on the left-front fender. Black wheels, taken from the ZR-1, required extra flare around the fenders, leading to the Grand Sports unique stance. Each Grand Sport was equipped with the 330 hp LT4 V8 engine. In all, 1,000 Corvette Grand Sports were built. Corvette returns to the global motorsports stage in 1999 with the C5.R. After an impressive debut, the team scored its first of three GTS class wins at Le Mans in 2001. The C5-R also helped secure four consecutive ALMS team and manufacturer titles (2001-04). With a new C7 generation of Corvette, a new racer was revealed. The C7.R has had similar success like its predecessors, winning its class at the 24 Hours of Le Mans. The 2017 C7 Corvette Grand Sport is introduced, bringing the storied nameplate to the seventh-generation of Corvette. It harkens back to the racing pedigree founded decades ago by featuring track-ready aerodynamics, Z06-inspired body pieces and a naturally aspirated 6.2-liter LT1 V8.  The question now is, will Corvette mark the final year of a series with a Grand Sport?  We think yes! 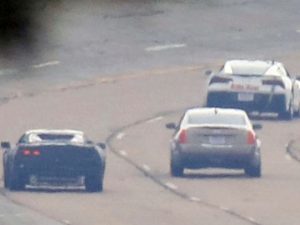 The Corvette factory is slated to close in August.  Conspiracy theorists say that is is closing to the public to retool for the C8.  Will it be mid-engine.  Friends in the know say there will be two.  A C8 front engine cruiser for the old guys and a pricey C8 mid-engine for the younger super car crowd.   Fact is that we did spot a mid-engine Corvette driving on the freeway near the Bowling Green factory this past summer.  The other indicator that it might be coming is that they got whooped really bad at the Rolex 24 Hour race last month.  Corvette Racing does not like it when Ford, Porsche and Ferrari beat them.  Last place…not for Corvette.

It was a hard decision, but it is time that Ozzy finds a new lover.  Even though White Hot is Wendy’s baby, I get to drive once in a while.  Ozzy is on the market at Gateway Classic Cars in Orlando.  Fun to go fast, but not a cruiser.