It is hard to believe that 2014 marks four years on the road 100% full-time and a total of 14 years traveling the US and Canada at SeeLevel on the road.  When we custom built our motorcoach, The Grizzly, we planned to set out to see our customers, conduct seminars, attend tradeshows and see things that we ha missed flying back and forth across country.  It is now four years later and we could not be happier.

Our lifestyle is a seven day a week endeavor to maintain and grow our business.  In 2011 we set forth a plan to expand the business by creating plans to build our own facility.  The first step was to find the where.  With over 80% of our business west of the Rockies, we looked for a business friendly State and found that in Wyoming.  Equally, Wyoming welcomed us with open arms offering land and facilities.  It was a little overwhelming at first, but we started relocating our C corporation to Wyoming in late 2011.  A provision of Wyoming law allowed us to “continue” our federal entity to Wyoming  with very little effort.  So, Orion Learning International Inc. and all of our businesses became a part of the new west in Wyoming.  We also moved our official residence to Wyoming.

We started some new businesses in the last couple of years.  KODA is a Lakota Sioux word meaning “friend”.  We named our new dog products business KODA and launched it at SuperZoo tradeshow in Las Vegas in September of 2012 (www.keys-koda.com).  We set out on a year long advertising campaign in Animal Wellness Magazine that quickly brought KODA onto center stage in the pet industry.  It is a tough market to crack, but we have done a pretty good job starting our position with ten new products at launch. 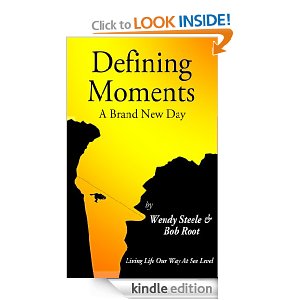 We were also under a lot of pressure from friends and family to republish our book Defining Moments adding the original first chapter back into the book. We struggled through some very complex issues with various publishers and decided to establish our own publishing company.  M42 Publishing (www.m42publishing.com) was born and the first book that was published was Bob’s Chemical-Free Skin Health which is now in its fourth printing.  M42 is a funny name as we originally wanted to name the company Orion Publishing.  The name was taken, so we did the next best thing.  M42 is the astronomical designation for the Orion constellation…”where stars are born.”  Subsequently, we did republish Defining Moments as a eBook on Amazon’s Kindle reader format.  Bob is working on a couple of new books…in his spare time.

We moved production of the Keys products in earnest in first/second quarter of 2013 being forced to close our business for a month.  It was traumatic and a 24/7 effort, but we reopenned for business on April Fools Day 2013.  Never looking back, we reinvented ourselves and even launched a new cosmetic line called KPRO at the September 2013 Expo East tradeshow.

Finally the Maryland housing market has seemingly started to turn around and we actually have a serious prospect for our house in Annapolis.  Only time will tell.

As for Wyoming, Randy Bruns of the Cheyenne Leads, has offered us a building where we will make a yet unannounced food product line.  There are some things occupying our attention at the moment, but we will be in Cheyenne after the second thaw to begin making plans.

Right now, we are in Southern California working on our 2014 busy season which commences in early February.  February, March and April will find us jumping around southern, middle and northern California visiting dealers, tradeshows and a continuation of Bob’s book tour.  Then it will be off to our motorcoach condo in Oregon to commence our northwest and Canada 2014 tour and visits in May through September.

We often joke about not having any time because of the demands of Orion businesses, but Bob is competing to be a finalist for a introductory time-lapse sequence for a new motion picture.  So, he has ramped up his experimentation and can be seen on his Chill Travelers gallery.  You can click on the gallery icon to the right or go to Chill Travelers Photo Galley.  When there, click on the time-lapse gallery and choose either the Time-Lapse or the R&D Time-Lapse Galleries,