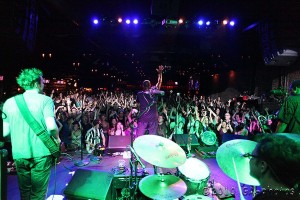 This has been a uniquely demanding and interesting beginning of our annual summer tour.   The business is growing again after a year long battle to regain dealers and end user confidence.  Strange times indeed.  Bob is into his outline for his book about the dark side of the natural products industry.

Seven Deadly Sins! All in One Convenient Location

So the tour began in Las Vegas at the opening of the LINQ and our debut to the Brooklyn Bowl.  What a great music venue for us.  The open stage surrounded by bars on three sides and a bowling alley on the other, it is a throwback for musicians back to an intimate setting that happens to be one of the best sound systems going.  People sitting in the various restaurants can listen for the price of their dinner and those that want to get up close and personal can hang in the open stage area for $20.

And some of the best fried chicken you will ever experience.  The crowd on opening night was moderate to large given that it was Chill music.  Checkout our Instagrams.  Curiosity turned to an all out dance party reminiscent of Ibiza.  The down tempo numbers blended with the electronica had the staff and patrons sliding to the music.

Off To Coachella, Indio CA

Before our jump to Seattle and beyonds north, the tour moves to Coachella for two weekends of sold out Bonobo discoverers.  Sine buying our KORG M3 and inspiration by Theavery Corporation from DC, we are constantly in the world of Chill, Down Tempo and Electronica.  It has been like a second childhood. 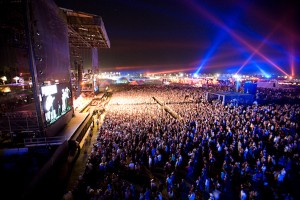 The Coachella Valley Music and Arts Festival (Beginning April 11) is an annual two-weekend, three-day music and arts festival held at the Empire Polo Club in Indio, California, located in the Inland Empire’s Coachella Valley in the Colorado Desert. It was founded by Paul Tollett in 1999 and is organized by Goldenvoice, a subsidiary of AEG Live. The event features many genres of music, including rock, indie, hip hop, and electronic dance music, as well as art installations and sculptures. Across the grounds, several stages continuously host live music. The main stages are: Coachella Stage, Outdoor Theatre, Gobi Tent, Mojave Tent, and the Sahara Tent; a smaller Oasis Dome was used in 2006 and 2011, while a new Yuma stage was introduced in 2013.

The festival’s origins trace back to a 1993 concert that Pearl Jam performed at the Empire Polo Club while boycotting venues controlled by Ticketmaster. The show validated the site’s viability for hosting large events, leading to the inaugural Coachella Festival being held in October 1999 over two days. After a sojourn in 2000, the festival returned on an annual basis, beginning in April 2001 as a single-day event before reverting to the two-day format in 2002. The festival was expanded to a third day in 2007 and eventually a second weekend in 2012. Organizers began permitting spectators to camp on the grounds in 2003.

Coachella showcases popular and established musical artists, as well as emerging artists and reunited groups; the 2014 festival will feature 184 artists.  Notable appearances in the past include: Amy Winehouse, Dr. Dre and Snoop Dogg, Prince, Paul McCartney, Arcade Fire, Wu-Tang Clan, The Killers, Radiohead, Daft Punk, Madonna, The Cure, Kanye West, The Black Keys, Rage Against the Machine, Beck, Nine Inch Nails, The Strokes, The White Stripes, Jay-Z,Beastie Boys, Muse, Red Hot Chili Peppers, and Foo Fighters. Coachella is one of the largest, most famous, and most profitable music festivals in the United States. In 2010, it drew about 75,000 people each day, for an estimated attendance of 225,000 people per weekend.