It is an incredible understatement to say that Ronald Reagan changed my life. As a young corporate dink I was stuck in a great job that could last a lifetime if I wanted it. Always the entrepreneur, my corporate lethargy was shocked into reality by many of the things Ron Reagan had done and said in California and then as President.

I have taken many trips the the Reagan Library in Simi California. Each was unique and one even included a surprise birthday party Wendy planned for me on the celebration of Ron Reagan’s 99th birthday.  This year, I received a very special birthday gift from our friends Tina and Dennis.  Their surprise?   A personal tour of Ron and Nancy Reagan’s Rancho Del Cielo which roughly translates to Ranch of Heaven.

This article could be the length of a book.  There were so many interesting experiences and subsequently a big photo assignment for me.

We were in Malibu in March.  Tina and Dennis said to come to their home and we would drive together to Santa Barbara.  We arrived at the new Reagan Ranch Center which is in a renovated hotel next to the Amtrak station in Santa Barbara, California.  When we arrived, we were greeted by one of the directors and it was then that I learned that we were going to have a private tour of the ranch.  Our guide, Jason, packed us into a Suburban and we began our trip to the ranch which ironically overlooks where we stay in Goleta.  We ran up the freeway and just past Ocean Mesa, We turned inland on Refugio Road and headed straight up the mountain.  Winding back and forth we would catch glimpses of the ocean and the channel island now below us.  Near the top of the 3000 foot mountain we turn and stop at a gate.  Jason jumped out and unlocked our way in.   A short distance was another gate that was open and we dropped down into this green bowl pasture with a small white house with a red tile roof.   We had arrived. 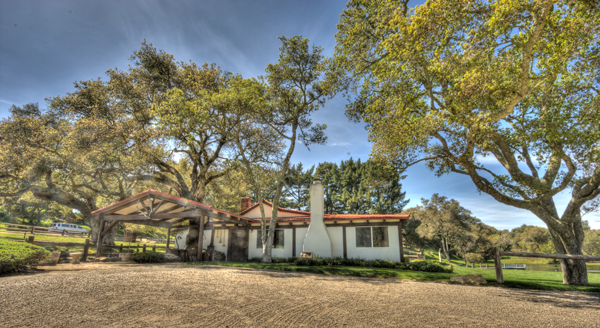 The simplicity and beauty were overwhelming.  This was the famous western White House that Ron Reagan had spent nearly a year of his 8 years as president.  On and off over his two terms, he would visit and be visited by heads of state that included the Queen of England, Margaret Thatcher and even Mikhail Gorbachev the Russian president.  Now we were visiting this humble place that was Ron Reagan’s favorite place to be.

Jason told story after story as we walked through the interior rooms, the horse stable and the Secret Service barracks.  All in there original state.  Not restored, original!  Just the way they were left when Reagan was president.

No interior pictures we were told by Jason.  Tina and I had expected this.  Tina is not only a great friend, but she is also a great photographer.  Shooting a technique called HDR, Tina and I have been in some interesting places shooting pictures and this was yet another.  So, we did take the opportunity to grab some shots of the outside as Jason told stories. 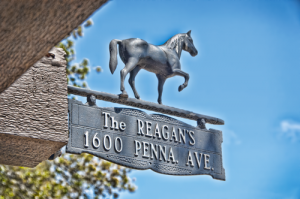 Then it was lunch time and Jason drove us to the Secret Service quarters and main facility at the ranch.  It was functional and everything was right out of the 80’s.   Jason had brought lunch and we sat around the kitchen table eating and telling sories of our own Ron Reagan experiences.  It was sort of unreal and we all had interesting insights.  This began to create an interesting bond between the five of us.

Then it was onto the riding barn that was Ron Reagan’s favorite place.  As a young soldier, he was in the US Cavalry. He was an accomplished horseman and the tack room was amazing.  Jason in a momentary lapse of reasoning allowed me to shoot some pictures in the tack room.  This would become the beginning of my interesting assignment.

The day was ending and I had a few shots in the camera as we headed back down the mountain.  It was hard to realize that I had spent time here which is not open to the public.  The ranch was purchased from Nancy Reagan a short time ago by the Young America’s Foundation to preserve for history this western Whitehouse.  We returned to the Reagan Ranch Center, said goodbye to Jason and headed back toward Los Angeles.  Our trip back was full of candid conversation.

Back in Malibu, I sat down and assembled some of the pictures I shot to see how they turned out.  HDR is an amazing technique and often has very dramatic results.  So, no surprise, two of the tack room images turned out great.  The next day, I emailed them off to Jason as a sort of thank you for his time and my great birthday adventure. 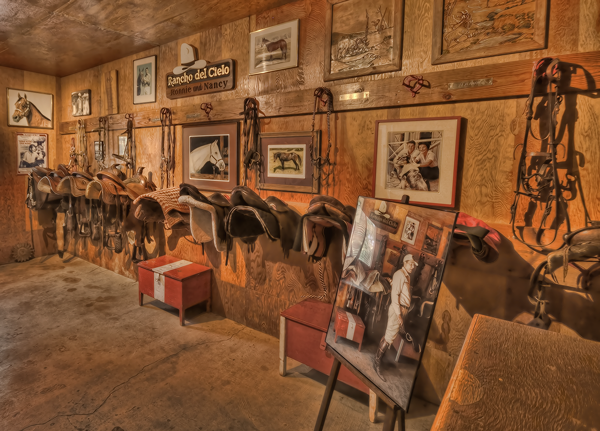 Just a few days later, I received a phone call on my cell.  I did not recognize the phone number, but I knew it was a Santa Barbara exchange.  So I answered and on the other end of the call was a woman who identified herself as Marilyn Fisher, the curator of the Reagan Ranch.   She told me that she had seen the tack room pictures and wondered if I would be willing to shoot the interiors of the ranch home and “anything else I wanted to shoot.”  I held my composure as I wanted to say “Damn Straight,” and I said yes and when?  She said, “How about tomorrow.”  You bet I said. 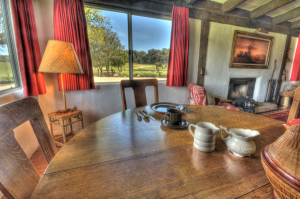 The next morning I got my camera gear together and tested everything.  Batteries recharged, we drove north on California 101 and waited for Marilyn at the base of the off ramp to Refugio Road.  She was perfectly on time and we followed her up to the ranch.  Like before, the weather was spectacular.

When we arrived, Marilyn gave me free reign of the ranch.   Marilyn and Wendy sat in Ron and Nancy Reagan’s kitchen on stools at the kitchen counter as I began to shoot.  Everywhere I turned, there was history.  A library of books all signed by the authors, old catalogs, dial phones, memorabilia and favorite items that were Ron and Nancy’s.  The famous hat worn by Ron for the press and the Sombrero that Nancy wore for her Life Magazine cover.  Room after room, the pictures were happening as fast as I could shoot.

For my HDR photographer friends, all the shots were 9 bracket at 1 stop increments because the lighting was so difficult.   I could have closed the drapes, but I had heard from Jason that they were always open because Ron wanted to see the lake and the mountains as well as his friends the horses.  So, I could not close the drapes and lose that feel.  For my non photographer friends, each image I shot was a composition of 9 pictures merged together for their tonal properties and then processed using filters I created.  So, the 100 pictures I shot that day were comprised of 900 images.

As I shot pictures, I could hear Wendy and Marilyn talking, laughing and sometimes very serious in the kitchen.

I was done inside and moved outdoors to get my final shots.

Back at the coach, I began to assemble the images.  This literally took a week of time with my automated steps happening overnight as we slept.

About a week later, I contacted Marilyn to schedule a showing at the Reagan Ranch Center and asked here to invite anyone that she wanted.  We booked time at the theater and I took the images and put them to music and processed them into a 6 minute video to capture the essence of the shoot. 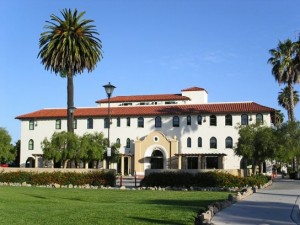 Wendy and I arrived at the center and we were greeted by Marilyn.  I handed a thumb drive to Brent the Director of Operations for the Center and he loaded the video and images onto a Mac they have and we set the video to stand-by.  I explained the HDR process to the assembled group with the caveat that what they were about to see was only 20% of the resolution of the actual images.  I shared my frustration with them that the images that I shoot are often 8 to 10 times higher resolution than can be seen on any technology other than high resolution prints done on aluminum.  Then we began.

Below is a very low resolution video that is a copy of what I presented to them.  Below that is a link to my online gallery page with more of the images.  These can be viewed in actual size once in the gallery.

My summary is, “What a wonderful birthday present from my friends Tina and Dennis!”   It was a wonderful experience to relive a part of a man’s life that so changed mine.  I met some wonderful new friends and an open invitation to return any time I want.  I am also humbled to have my pictures as now a part of Ron Reagan’s Presidential Archive.

In my corporate life we had a term for it.  BHAD!  or Big Hairy Audacious Deal!

Enjoy a bit of history…Bob!

Here is the Link to my gallery images of the Reagan Ranch.  Click Here